Approximately one in five people is highly sensitive also referred to as HSP – highly sensitive person. If you are highly sensitive, your nervous system will be more finely tuned than other’s. You are probably very receptive to other people’s moods and noise, disorganisation and unpredictability will have a significant impact on you.

Highly sensitive people have a rich inner life. Only a few inputs from the surroundings can set off an entire film in the mind of a sensitive person. When your sensitive system receives more inputs than other people and these inputs then activates more inner processes, you will reach a point of overstimulation quicker than most – and you will need to withdraw to a quiet space to spend some time digesting all the inputs.

You are probably good at coming up with new ideas and see new possibilities, and you have a talent for predicting what could go wrong.

If you are highly sensitive, you are most likely to answer no to the statements below:

And you will probably answer yes to most of following the statements:

The highly sensitive trait is not a new discovery. It has just been called other things, such as introversion. American Psychologist and Researcher Elaine Aron has introduced and described the idea of the “highly sensitive person”. She talks about how she herself believed being introverted and being highly sensitive were the same thing until she realised that 30% of highly sensitive people are socially extroverted.

The trait has also been called things like: inhibited, anxious or shy. Words like these only describe how the trait appears to others when the highly sensitive person feels unsupported and unsafe. Describing the trait in such ways does not take into account that even though highly sensitive people may experience more problems and challenges than others under pressure, they are also capable of deep happiness when their surroundings are peaceful and supportive.

The fact that even though they can feel uneasy, if the right circumstances are not in place, they can also flourish wonderfully under the right circumstances, which is supported by research findings. One study showed that children with strong reactions* in challenging situations (i.e. sensitive children) became ill more often and had more accidents than other children under pressure. But these children were less ill and had fewer accidents than others when they were in their normal and familiar surroundings. 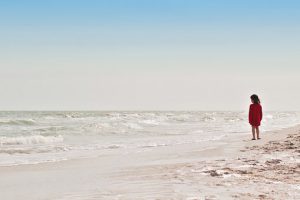